This time, let's explore some software options.  There are both free and commercial options available.  For this series, we focused on free (although some require email registration).  the following options are explored in this article:

Friendly reminder:  As always use this information responsibly.  Make sure you own the equipment prior to experimentation and learning.  We do not condone malicious intentions, are not held responsible for your actions, and will not bail you out of jail.

This software is offered for free (http://www.atmel.com/tools/RZUSBSTICK.aspx) with email registration from the same maker as our RZUSBSTICK hardware.  It runs on Windows, including a Windows 7 virtual machine which is what our environment used.  Best of all, AVR tools works with the stock firmware so there is no need to flash the RZUSBSTICK.  Included in the download is the following:


The component architecture is shown below: 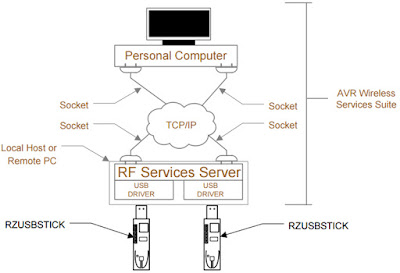 RF Services Server creates the bridge between the RZUSBSTICK hardware and the software to which the user interacts.  AVR Wireless Services Suite provides the UI for human interaction.

The screenshot above shows the software download on the left, rfservicesserver running in the command prompt on the top right, and AVR Wireless Services GUI running in the bottom right.  AVR Wireless Services provides packet history, a graphical node display, and a packet drill down feature similar to Wireshark.  Of course Atmel offers more capable software at a price, but this is not too bad of a start for a free offering.

Luxoft offers a tool called BitCatcher (http://www.luxoft.com/embedded-systems-development/bitcatcher/) which is also free with email registration.  This tool runs in Windows (binary) and Linux (Java app).  The biggest downside is that it requires custom firmware to be loaded onto the RZUSBSTICK via a flash upgrade (will discuss in a later article).  The flash upgrade changes the hardware ID which allows a custom driver to convert USB to COM which BitCatcher then uses to interact with the hardware.

Our setup process was the following:

The software download is shown on the left and the BitCatcher software is shown on the right.  There is a packet timeline and drilldown functionality similar to Wireshark, but with less detail.

The last software we will mention is the Killerbee framework from Josh Wright and River Loop security.  Killerbee is a free download from github found here:  https://github.com/riverloopsec/killerbee.  Some tools work with the default Atmel firmware while some require Killerbee firmware.

The tools that work with the default firmware:

The tools that require the killerbee firmware:
Killerbee comes pre-installed with most Kali distributions, however your success will vary.  Here was our out-of-the-box experience:


The moral of the story here is that just because the tools are pre-installed, does not mean they will work.

The github page recommends installing the latest version of the software anyway.  These are the steps we used in a Kali 2.0 installation:

This article outlined the software we will use to examine the 2.4 GHz ZigBee frequency range.  We are very appreciative for those who released free software--Atmel, Luxoft, Josh Wright and River Loop security.  Here are some general observations:


The next article will cover some potential passive attacks.
Posted by Tony Lee at 6:55 AM